Are you on the hunt for a fun new game to break out during your next trip to the brewery? How about a new board or card game to play while you hang out with friends and enjoy some beers? Do you still have that new in-shrink copy of Brew-Opoly that someone gave you because they heard you were into beer and you never opened it because it’s basically Monopoly and Monopoly sucks? Drop that dust collector off at Goodwill… Here is a list of some of our favorite beer themed games that are worth getting to the table. 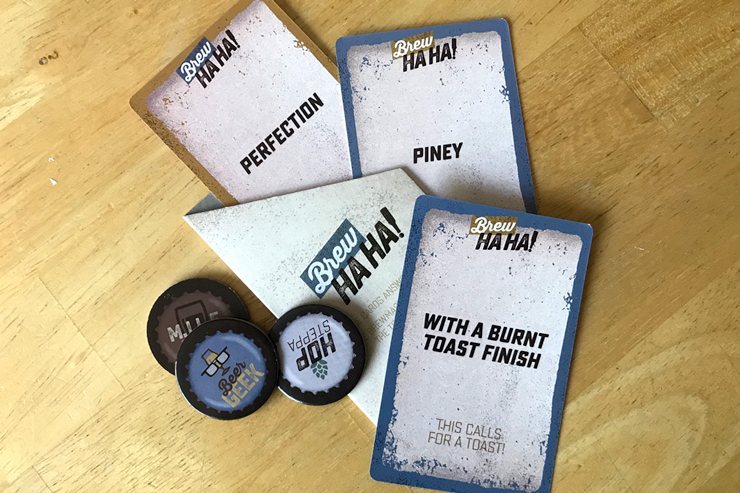 Taking inspiration from Cards Against Humanity and Mad Libs, Brew Ha-Ha by Uncorked! Games is a party game where you combine tasting note cards to create descriptions of beers and then your friends.

To get started you will need a couple of beers to sample and 4 to 8 players to participate. Each player is dealt a hand of 8 cards from two card decks (4 noun and 4 adjective cards) that they keep secret from the other players. One player is then chosen at random to become the “Brewmaster”. They present one of the beers and make sure each player has a sample. Players taste the beer and then put together a description using up to 4 cards from their hand, passing them along to the Brewmaster when they are finished. The Brewmaster randomizes all the submissions, reads them out one by one, and then awards some points – 1 point for the most accurate description and 1 for the description they liked the best.

The play continues until all beers have been sampled. Once the beers are gone the game moves into “Character Assassination” mode. Instead of describing the beer, you describe each Brewmaster as if they were a beer. You can play this phase out until all participants have been attacked or one or more friendships have been ruined. The player who was awarded the most points through both phases is the winner.

Brew Ha Ha! is a fun twist on the Cards Against Humanity model where the whole point is to offend people or make them laugh. Most of our games of Brew Ha Ha! have rarely focused on accurate descriptions. Players will need a thick skin to hang during the Character Assassination round, so I would avoid playing this in a mixed crowd. It can be a lot of fun with a tight group. The game is portable, so it would be perfect for a brewery trip or other social gathering. 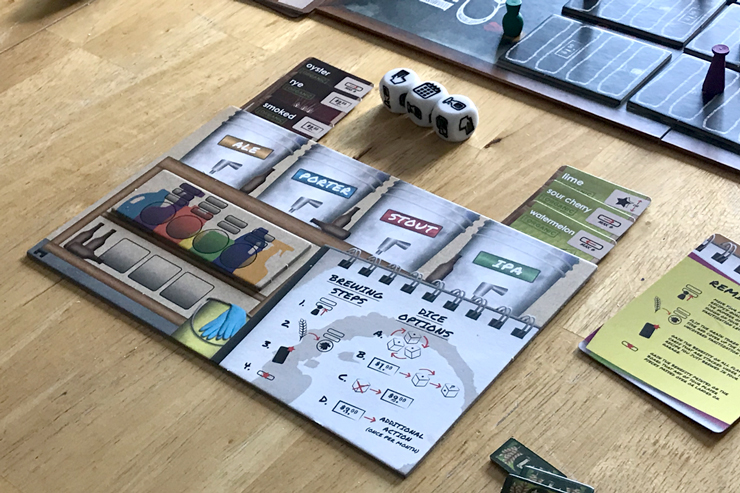 In Homebrewers by Greater than Games, 2-5 players play the role of a homebrewer who is competing against their fellow local brew club members for the highest quality beer.

The game is played over a series of 8 rounds. At the beginning of each round, you roll some dice to see what actions you can take: buying ingredients, participating in monthly club events, adding flavors to your recipes, cleaning your equipment, or brewing beer. You will craft beer recipes in four categories: Ale, Porter, Stout, and IPA. Your quality level for each recipe increases each time you brew a particular recipe.

The goal of the game is to gain the most reputation, which can be obtained through two main ways. First, by moving up quality tracks for the four beer categories to win medals during the 4th and 8th rounds, and second, by crafting your recipes to meet the particular tastes of a panel of judges during the final round. A crafty player will try to leverage both to end up with the highest reputation at the end of the game.

We play Homebrewers a lot. It is easy to learn, plays pretty quickly, and foams over with theme. The rules may seem a little complicated on the first read, but they clicked for most of us after the first turn. Setup is variable, so the tastes of the judges and a few other options will change for every game. The randomness of the action dice can bite you sometimes, but not enough to completely ruin an entire game for you. 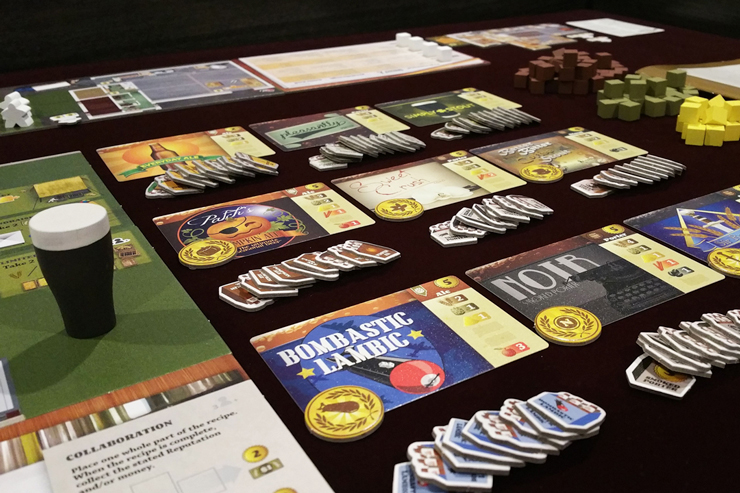 In Brew Crafters, also by Greater than Games, 2-4 players compete to create the most successful craft brewery. Over a series of rounds, you will compete with the other players for resources like malt, yeast, and fruit while managing your beer production, workers, and operating costs. You assign workers to perform tasks like brewing beer, building new infrastructure, or doing research to improve your business. Just like in real life, the income you generate is limited and is mostly based on the quality of your beers. You have to be strategic on when and where you spend your profits.

Each brewery has access to a variety of equipment and employee upgrades to help grow the business. For example, spending cash to increase the size of your bottling line will help improve your long-term revenue. As the game progresses you will also learn how to brew specialty beer recipes that will earn your brewery honors and prestige. This is all in an effort to accumulate points, which determines the winner at the end of the game.

There are plenty of nods to other brewery operations that make this game interesting. You can have workers develop yeast strains to improve various aspects of your business. You might even work on a collaboration beer with other players – if the recipe is a success then both players benefit.

A Fun and Challenging Puzzle

Brew Crafters is a perfect brewery simulator, but it can be a challenging puzzle that might be intimidating for less experienced gamers to get into. Figuring out how to best plan and operate your business is the game – you can be punished for making bad decisions. It can sometimes be difficult to catch up to more successful players once things go south. I love this type of challenge, but it is not for everyone.

Greater than Games also makes a simplified card version of this game called Microbrewers. I haven’t had the opportunity to play it yet, but it might be a better option if you are looking for something more accessible with a similar theme.

Beer Styles that Need to Make a Comeback: Experts Weigh In