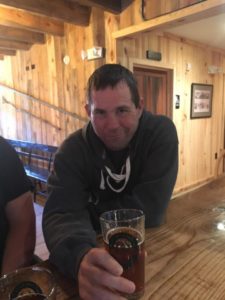 Mark McPherson’s journey to becoming the Head Brewer at The Historic Cold Spring Village Brewery had many twists and turns.  Mark was working with the company that was moving the barn, which now houses the brewery, from Palermo to The Village when director Anne Salvatore heard that he had some brewing experience.  After speaking to Mark, Cold Spring Village had found their brewmaster. Mark installed the brewing system and got the brewery up and running.   Mark has big plans for the brewery and was kind enough to sit down with us and talk beer.

Special thanks to Mark, Anne, Tammy, and John for their hospitality!

The first beer I made was an IPA, it was pretty good for a first try!

Yes I look, but it does not affect my recipes

Talking with locals, also we have 6 acres of land I would eventually like to use for the brewery.  We also have several of the elements for beer growing naturally like Sorghum, which we can turn into molasses and use in the brewing process. (Editor’s note, this is Mark’s future plan, but will take some developing)

Keep it simple! Learn how to produce good, clean beer.

It takes more than you think!

Barley Wine aged in Casks, not bourbon casks or anything like that, just natural aged wood casks.

The starting lineup was a hit!

Where do you see the brewery in a year?  In 5 Years?

In the next year double our sales.  In 5 years we want to be able to support The Historic Cold Spring Village, this is the Brewery’s Mission.  We want to sustain the Village, lessen our reliance on grants, and be able to lower gate fees for the Village.

Here’s What’s on Tap This Week!