Beer and the Pandemic

In case you missed it, we have been under some sort of quarantine or restriction for over a year.

That may be the understatement of the year. It has changed just about the way we do almost everything on a day-to=day basis. Things that we took for granted, like shopping or eating out, became logistical nightmares leaving many businesses either closed or working on such a small scale that it was almost impossible to stay open. People were hoarding toilet paper (Remember that!), hand sanitizer, Clorox wipes, and cleaning products. Due to a meat shortage, we were learning new ways to cook with cuts of meat that were shelf stinkers that nobody wanted prior and finding a pack of hot dogs was like winning the lottery. That’s enough reminiscing, we all remember what it was like. Life was gonna be different.

The brewery industry here in New Jersey had its own set of challenges. Already accustomed to changing rules and, in many respects, being handicapped by the state regulatory agencies that seem to want to keep the industry from growing or being on a level playing field, breweries (as well as distilleries and meaderies) were going to have an uphill climb. It was spring and we were heading into the busiest and most profitable 6-8 months of the year, the time of the year that you need to get a ton of patrons in the doors and a bunch of barrels of beer out the door. Although everyone was hit very hard, the South Jersey Shore was especially crippled when campground openings, hotel stays, and vacations were severely restricted or banned. Beer was in the tanks, brewing schedules were made, accounts were lined up, and it was going to be a great summer. How were they going to survive?

A bit of good news occurred when the State allowed, for the first time, curbside pickup and home delivery of craft beer. Then they stopped it. Then they allowed it again. Typical of being a brewery owner in NJ, you have to be able to constantly change your business model at the whim of the regulatory organizations of the state. Governor Phil Murphy made the decision via executive order on March 16, 2020 to allow home delivery and curbside service, but on the following Monday, the order was rescinded because the existing law only allowed brewpubs, liquor stores, and wineries to do this. Many of the brewery owners I spoke with at the time were not surprised, this had become the typical treatment of the industry since it was allowed to sell beer by the glass in 2012. I can remember the anger and disappointment with one brewery owner telling me that if he cannot do this he will be shutting down for good and moving out of state. Then, in a rare instance of good news, on March 21st the executive order was once again in effect as its wording was changed to comply with existing statutes. Now all they needed was for people to come and get the beer. And they did.

A Community Steps Up

Build it and they will come. Well, make it and they will come may be more appropriate here as people began showing up in amazing numbers. The New Jersey craft beer community stepped it up and showed an incredible amount of support for the breweries. People were coming out in droves to support local breweries, buying insane amounts of liquid from their favorites, and making trips to breweries they had not been to in a way to show support for the industry. Facebook groups emerged touting who had what, when it was available, and how to get it. One private Facebook group led by now local beer legend Brian Kiefer, South Jersey Brewery Madness, did an NCAA-like tournament that saw insane amounts of people participate and crown Tonewood Brewing of Oaklyn as its first Champion.

When Covid hit and everything was shut down, we were cut off from our favorite hobby and social activity so I decided to create the bracket to pass the time thinking Covid would only last for a couple of months

The support was helping local breweries keep their head above water, but the loss of the ability to sell draft beer in tasting rooms and to bars, restaurants, and other businesses due to closures was dipping into their margins. Typically breweries make about 30-40% more on draft beer either in a glass or in a keg as a result of less production cost. The cost of canning and/or bottling adds a significant amount of both labor and material cost to the bottom line. Oh, did I also mention there was a bit of a can shortage? Breweries that were not canning were looking for ways to get their product into consumers’ hands. Growler fills were frowned upon and a significant amount of breweries were not canning as of yet. Crowler machines were one way that people were able to get beer out, but if you did not have a machine that did this you were gonna have to wait a few months for one. One way that “canless” breweries were able to get beer out was the Twisty Can, a crowler that had a twist-off lid rather than being seamed, but they were really hard to find due to the demand. Remember, there was a lot of beer in tanks at these breweries that had to get into some sort of vessel to be able to be sold and some had to dump it, or get it into kegs and hope for the best. 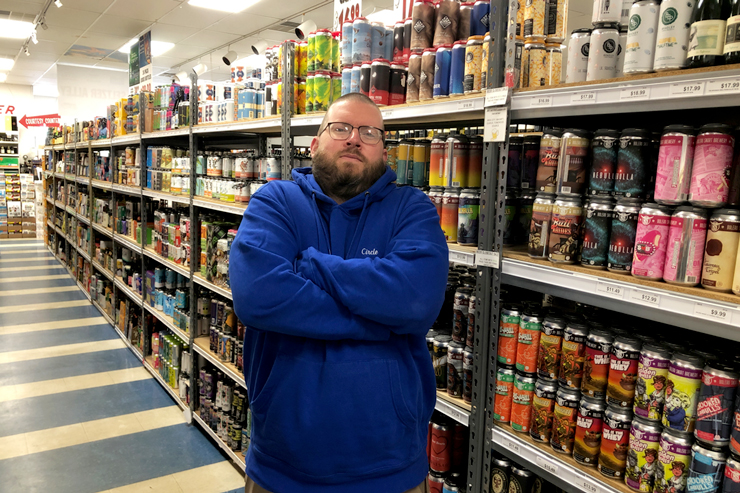 Fast forward to June 15th, 2020. Governor Phil Murphy signed an executive order allowing outdoor dining only and he included breweries along with the bars and restaurants, a big win for the industry. Guidelines were set and almost every brewery added construction management to their job duties and worked with property owners and local municipalities to get their areas safely opened. It was amazing to see the ingenuity of the community when putting these areas together. Picnic tables were built. Pallets were repurposed as fencing. Windows were built into the existing brewery walls to allow walk-up service. Plastic cups replaced glassware and extensive cleaning guidelines were met. Some breweries even instituted a reservation system to ensure seating for people. And now they could move some of their draft beer which would be a huge revenue boost and get some beer moving through the tanks.

Just let us know what we are allowed to do, the safety guidelines, and we will figure out the rest. We are a creative group of people full of ideas and we will get the job done.

So now breweries have curbside, delivery, and a limited amount of outdoor service. A small amount of draft beer is going out to bars and restaurants and a bunch is still going into aluminum tubes and on the shelves of liquor stores everywhere. But how much is moving off these shelves? In the last few years, New Jersey has seen a ton of out-of-state breweries start distribution here. There are more choices on the shelf than there have ever been. Sought after breweries and beers that we never thought we would see in New Jersey like The Alchemist and their legendary Heady Topper, Three Floyd’s Zombie Dust, Bissel Brothers Substance, Toppling Goliath’s King Sue, and many more, just to name a few are side by side with the hundreds of different New Jersey Craft Beer that is now being put into cans and bottles. The competition is so intense that getting 12″ of shelf space is more critical than ever.

One silver lining of the pandemic is that we were able to get many beers in cans that were available only in the taproom. Beers that we had only heard of were now readily available to stick in your beer fridge and enjoy at home. Also, we saw several special releases and one-offs that we may not have seen without the pandemic. Breweries were seeing what type of hops and grains were available and got creative with adjuncts and we saw some really cool stuff that we may not have seen otherwise. I can think of no business that did better turning lemons into lemonade than the brewing industry.

The Reader’s Digest version of the rest of the year is that things continued to open up and, as of this writing, we are back open with little restriction. Many of the people in the industry are looking forward to getting back to the way things used to be done, but a few things that were learned during the pandemic are going to stick around. For example, you will continue to see more can releases since breweries have made investments in their operations to expand distribution. In addition, the expansions to their outdoor areas at a ton of the breweries will be more permanent as long as local municipalities will allow it. Our first big event of the year has been planned as The Super Bowl of Craft Beer, The Atlantic City Beer & Music Festival will be happening June 4-6 outdoors for the first time at Bader Fields 142 acres in Atlantic City.

Some things implemented during the pandemic are going to stick around. Zach Pashley of Gusto Brewing Company shared this with me, “Periodically through the past year and with the benefit of today’s hindsight, when we chose to view Covid’s roundhouse kick to the economic gut as a “maturation mechanism” the clouds began breaking to reveal some silver lining. One of the countless things we altered about how we deliver cold beer to waiting palms was table service. Tricky at first, and sometimes clumsy as systems refined, now we’re weirdly loving it. It creates a different and quirky experience for our guests that, we believe, adds to the overall enjoyment of our little Cape May adventure”. Some of the other things that Zack told us would stick around included the ordering and pickup of Beer-to-go and their beer garden which has quickly become a fan favorite borne out of necessity, now a permanent part of the Gusto experience

What may have been a little lost in this pandemic year was all of the people that are interwoven into the Craft Beer industry who have been almost forgotten. The festival and event promoters, food truck owners, and local musicians lost their livelihoods as a result of the pandemic. No single group was affected more as live events just completely went away. I would hope that everyone that so generously supported the local breweries, bars, and restaurants do the same for these businesses this year as they start working again more regularly.

Hope abounds. As we look back on the pandemic year it is almost like living a movie. At South Jersey Beer Scene we had a full year of plans that just went down the drain. Our video streams kept us in the loop and we were able to bring you your favorite local beer celebs to your living rooms to talk about their challenges. But the thing that I will most remember about this year is the incredible support that the brewing community gave to everyone, breweries, bars, liquor stores, restaurants, and to us here on the interwebs during this most unprecedented of times.