“After years of bringing our off-centered ales to the state, we are thrilled to introduce our spirits to our Dogfish Head fans and to new folks who enjoy a delicious cocktail,” said Sam Calagione, founder and CEO of Dogfish Head Craft Brewery & Dogfish Head Distilling Co. “When we set out to distribute our off-centered ales in New Jersey, it was the first time our beers were available outside our home state of Delaware. To honor that milestone, I built a canoe and rowed a six-pack across the Delaware Bay. For our first case of spirits, I think I might need to recreate that moment and jump on my SUP board,” joked Calagione.

Since 2002 when Dogfish Head started one of the first craft distilleries in America, they have experimented with small batch vodkas, gins and rums, honing recipes, and building a loyal cadre of spirit drinkers among restaurant guests and visitors to Coastal Delaware. At the heart of the distilling operation are two 500-gallon copper stripping stills and a 250-gallon copper vodka column, sourced from fourth-generation custom fabricator Vendome Copper & Brass Works in Louisville, KY. With consumers looking for the same goodness out of their craft spirits that led them to explore craft beer, Dogfish Head Distilling Co. offers a high-quality, distilled spirit and an honest and authentic approach wrapped in an interesting story.

Dogfish Head Distilling produces everything 100% from scratch, using only real ingredients starting in their rawest form; never adding flavorings or bringing in bulk spirits for re-distillation. “With a distillery located in the middle of our production brewery, we get to tap into all the same world-class ingredients, equipment and processes that we use in brewing,” said James Montero, general manager at Dogfish Head Distilling Co. “Using the same beer philosophy in our distillation approach, we have developed a diverse portfolio of craft spirits each offering something unique for spirits and beer drinkers alike.” 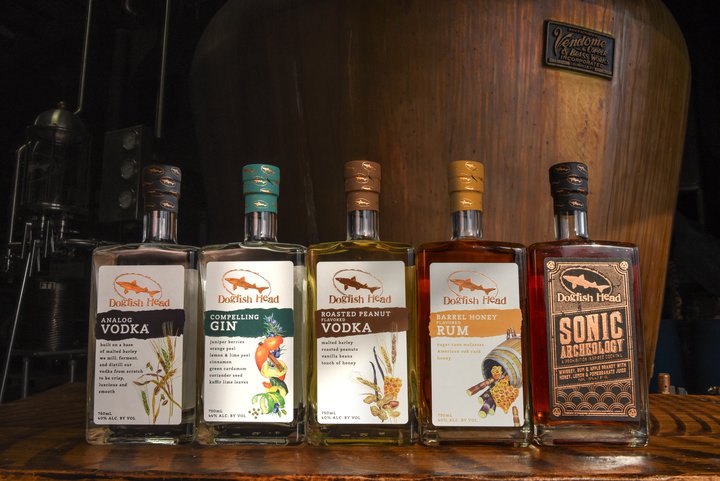 This portfolio of flavorful goodness will be available throughout the state and brings their total spirits market distribution to five states including Delaware, Maryland, Northern Virginia and Washington D.C. The full portfolio of Dogfish Head spirits are available for purchase at Dogfish Head Craft Brewery in Milton, DE and Cheasepeake & Maine and Brewings & Eats in Rehoboth, DE. For more information about Dogfish Head Distilling Co. visit www.dogfish.com, Facebook @DogfishSpirits and Instagram @DogfishSpirits

Dogfish Head has proudly been focused on brewing beers with culinary ingredients outside the Reinheitsgebot since the day it opened as the smallest American craft brewery 22 years ago. Dogfish Head has grown into a top-20 craft brewery and has won numerous awards throughout the years including Wine Enthusiast’s 2015 Brewery of the Year and the James Beard Foundation Award for 2017 Outstanding Wine, Spirits, or Beer Professional. It is a 250+ coworker company based in Delaware with Dogfish Head Brewings & Eats, an off-centered brewpub and distillery, Chesapeake & Maine, a geographically enamored seafood restaurant, Dogfish Inn, a beer-themed inn on the harbor and Dogfish Head Craft Brewery, a production brewery and distillery featuring The Tasting Room & Kitchen.  Dogfish Head supports the Independent Craft Brewing Seal, the definitive icon for American craft breweries to identify themselves to be independently-owned and carries the torch of transparency, brewing innovation and the freedom of choice originally forged by brewing community pioneers. Dogfish Head currently sells beer in 44 states and Washington D.C. For more information, visit www.dogfish.com, Facebook: @dogfishheadbeer, Twitter: @dogfishbeer, and Instagram: dogfishhead.