Death of The Fox Brewery and Coffee House Opens to the Public Today, 8/14/17

Death of the Fox Brewing Company is set to open to the public today, 8/14, at 6 am.  6 am may seem a little early for all of you beer drinkers out there, and it is lol, but DOTF is the first Beer AND Coffee Brewhouse in New Jersey.  DOTF Founder, Chuck Garrity, developed the concept, along with VP and Brew Chef Dan Natkin, which is modeled after a brewery/coffee house concept that Chuck saw in Portland, Oregon.

Chuck was an avid homebrewer for about 10 years before he made his decision to go pro. His “Stout Heard Round the World” won top score at the 2016 Philadelphia Homebrewer’s Annual Competition Once he made the decision, Chuck received his brewing certification from the Siebel Institute of Technology, World Brewing Academy.  Dan was also an avid homebrewer who has brewed for over 15 years.  Chuck refers to Dan as his “brew chef”, giving Chuck recipes and different flavor profiles which they brew several times to develop the taste they are looking for and to develop consistency in the finished product.

The combination coffee/beer tasting room is the first of its kind in New Jersey.  The tasting room consists of an 18 seat, 16 tap bar with high tops and couches arranged in the space.  There are plenty of places to sit, but you do not feel like you are on top of each other like in many of the tasting rooms we have all been in. The ceiling is open with real wood beams running across it, and the DOTF logo is perched prominently on the wall to the right of the bar.  Chuck told me that “with the design of what eventually became our tasting room, I wanted to harken back in time and give it a woodsy, hunting-lodge feel, but we also did not want it to become too stuffy”.  The room gives you a feel for the history, but it also has modern touches to it.  “We struck that balance (between historic and modern) with more contemporary lighting, a bit of an industrial look overall to the bar, but then softening the space with all the wood that we used”.  The end result is a comfortable, visually appealing take on the Revolutionary War era Tavern.

Death of The Fox Brewing Company gets its name from the Death of The Fox Inn, which was built (and still stands today) in 1727 in Clarksboro, Gloucester County.  The origin of the name of the inn can be traced back to pre-Revolutionary times when the Gloucester Fox Hunting Club, the first organized hunting club in America, often gathered here after the chase for food, drink, and hunting tales.   The Inn also served as a recruiting station and military headquarters during the Revolutionary War.  Following the war, the Inn served 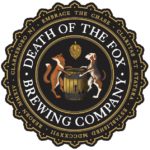 customers until the early 20th century.  Today it has been restored to its original state by private owners and still sits at its original site.  Chuck had this idea swirling in his head to start a brewery using Death of the Fox and its connection to local history and, as luck would have it, the owners of the Inn were also members of his church.  Chuck discussed the idea with them and they gave him the blessing to use the name.  One of the main reasons for this was that Chuck is truly a student of the Inn’s history and respectfully represents that in the tasting room.  Chuck even obtained a 100-year-old copy of a book about the Gloucester Hunting Club that he has read to add to the authenticity of the brewery, and Chuck and Dan have participated in fox hunts and have been accepted by a few organizations.

The brewery boasts a unique 10 BBL brewhouse that consists of a 5 BBL tank, which they call “big boy”, and 2 other tanks (little boys) that are each just under 3 BBL’s each. Chuck and Dan like the fact that they can actually brew 3 different beers at a time, using Big Boy to brew the flagship beers while using the 2 Little Boys to try experimental and small batch beers. Along with the cookers, there were 6 fermenters, 4 brite tanks, and serving tanks that lead right to the taps in the tasting room.  We had the opportunity to attend one of the soft openings last week and we encourage everyone to have Chuck or Dan show you the differences between their brewing system and what we see in most of the breweries in the area.

For all of you coffee lovers out there, DOTF’s primary roaster is Crescent Moon, a South Jersey-based fair trade coffee roaster and purveyor of fine loose leaf teas.  They also feature other top local craft roasters and frequently update their selections.  One of their flagship beers is a collaboration between DOTF and Crescent Moon , No Grounds Coffee Pale Ale.  No Grounds is an American Pale Ale that has been dry-hopped with coffee beans.  We had the opportunity to try it and the result is pretty great, it is not bitter and uses the coffee well in its construction.  Contrary to a lot of the Coffee Pales out there, it has a sweet finish that is surprising, yet welcome.

We tried all of the opening week selections and were impressed with the consistency of each.  Here is the lineup: 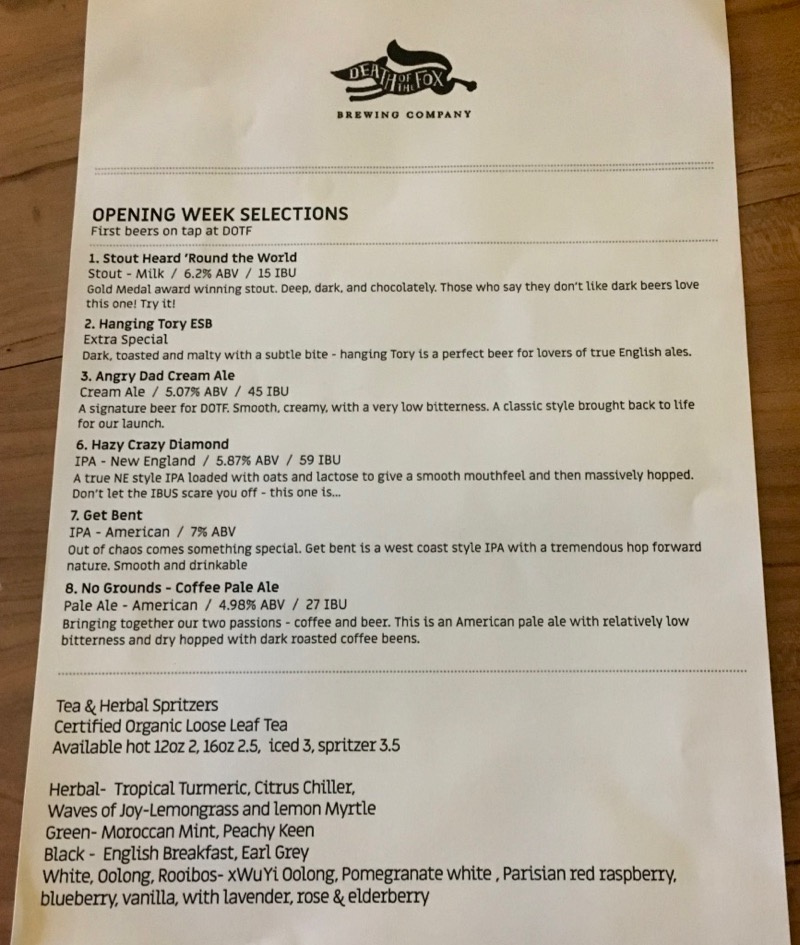 The Brewery is located East Greenwich Twp NJ, Gloucester County, just off Exit 18 of I295 at the Villages of Whiskey Mill- a new commercial retail and residential town center. DOTF is a BYOF friendly facility and has plenty of places to sit and eat while enjoying a beer or a coffee.

Congratulations and best of luck to Chuck, Dan, and the rest of the Death of The Fox Brewery staff on their opening and we wish you much success!

Visit Death of the Fox Brewing Company on the web at www.deathofthefoxbrewing.com