We are very lucky here in South Jersey to have had a boom of breweries that have opened in the last few years.  We believe that quantity is great, but the quality of the beer that is being produced here in South Jersey has been off the charts.  Eight & Sand Beer Co of Woodbury, who just celebrated their first anniversary on September 8th, is one of these new breweries making quality beer in South Jersey.  To top off what has been an amazing year, Eight and Sand just took home the Silver Medal at the Great American Beer Festival for Best Chili Beer for “Bad Hombre”, a truly fantastic honor.

Eight & Sand Beer Co. is owned by longtime friends Chris Mazzone and Chris Burke. “We were friends and have had the same group of friends forever.  We grew up in the same town and went to the same high school.  I was actually best man at his wedding a few years back” Mazzone told us.  Head Brewer Burke was an avid homebrewer since his college days and Mazzone runs the business end.  They had been working on the idea since 2014 and opened in September 2016. 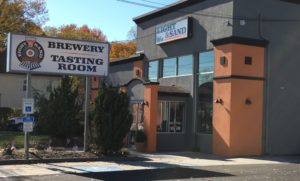 The name Eight & Sand is a nod to Woodbury’s rich railroad history.  The term “Eight & Sand” comes from a railroader’s traditional wish for a safe and fast journey on the rails.  Eight refers to Notch-8, which was a high-speed setting on some trains, and sand is a nod to the sand that was sometimes spread on railroad tracks to prevent slippage. The brewery is built not far from the railroad tracks that provided South Jersey with tons of goods for years, as far back as 1887.  This train theme is echoed throughout the tasting room as well in the names of some of their beers.  They also have strong ties to the local community and most of the staff is also from this area. 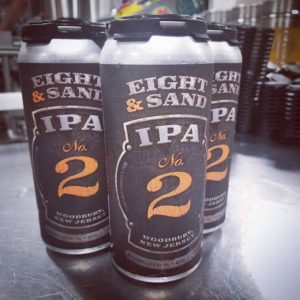 The impressive brewing facility is visible through the large glass windows behind the bar.  Giant 30 BBL fermenters dominate the view and add to the industrial look of the tasting room. “We designed this place to definitely accommodate more tanks, I actually didn’t forecast for  30 BBL tanks, I thought 20’s (20 BBL) but he (points at Chris Burke) really convinced me that canning was going to be huge and this was the best way to go”.  The thought in the design of the brewhouse allows for more expansion including a mobile canning system that has come in to package their IPA #2 in 16 0z. cans.

One thing that separates this facility from most is the use of steam to power the brewing system.  When Chris & Chris were designing the facility they could have used electric, direct fire or gas, or steam.  “Guess which one is the most expensive?” Mazzone joked.  The use of steam accomplishes 2 things for the brewery.  First, it is the most environmentally friendly way, something that is important to both guys.  The second is that steam saves much more energy when doing back-to-back brews, which they need to do to fill those 30 BBL fermenters.  Another unique element of the brewery is that the Nitrogen that “powers” their Nitrogen Tap is created right in the brewery.  Mazzone told me that, “Instead of having Nitrogen delivered to us we have a machine that literally pulls the nitrogen out of the air and into a tank”.  In February of 2016, a 21.08kW solar array was installed on their roof to add to their commitment to renewable energy.

Eight & Sand has a very impressive tap list. As many as 17 beers can be on tap at any single time with many varying styles.  “When we chose a tap system we wanted to go big, we wanted to offer variety,” Mazzone said.  One of the things that we forget is that sometimes you have to be able to brew with what hops are available, not with what you want when you first start out.  “We didn’t have any hop contracts so I went and bought whatever I could get at the time and kept ordering”, said Burke.  As the “spot”, or the secondary market has become more accessible a pretty steady tap list has evolved with everything from an IPA to a Grätzer, and everything in-between.

After I spoke with the guys they were headed off to the Great American Beer Festival in Denver to pour and compete in the competition.  “Bad Hombre”,  a Milk stout brewed with cinnamon, vanilla, serrano peppers, and Square One coffee took home the Silver Medal in the Chili Beer competition.  This is a testament to Chris and Chris’s dedication to beer and the art of brewing.  Taking home a medal from the biggest beer festival in the world is a truly outstanding accomplishment, and it happened within their first 13 months since the grand opening.

Congrats to everyone at Eight & Sand on their first anniversary and to the Silver at GABF. I suspect we will be seeing more great things from these guys in the years to come! Also special thanks to Chris Mazzone and Chris Burke for taking the time to sit with me in the middle of a busy brew day! Cheers!

On the web at www.eightandsandbeer.com

Dogfish Head Sprints into 2020 with Launch of Virtual Run Club