Road Trip! 10 Questions with Brett Cracco of St. John Brewers in The US Virgin Islands

Welcome to our “Road Trip” edition of “10 Questions With…”.  We go a little south of South Jersey for this one….well, actually WAY south, about 1,500 miles as we visit the beautiful island of St. John in the US Virgin Islands and the Tap Room at St. John Brewers.

St John Brewers tale starts in 2001, when 2 University of Vermont grads, Kevin Chipman and Chirag (Cheech) Vyas decided to leave the corporate world and move to the paradise that is St. John. Kevin and Cheech worked as waiters, bartenders and other jobs in the tourism industry to sustain them while they worked on their craft. After much experimentation, they arrived at what would be their flagship brew, a pale ale with island grown mango, a true local beer.

Serving as their own distributors, the beer exploded on the scene and the demand soon outpaced the production ability of the small brewery, so they reached an agreement with Shipyard Brewing in Portland, Maine to be their bottling and distributing partner. They also established what is now an island staple, the Tap Room. While the original Tap Room burned down in a fire in 2015, the partners soon rebuilt and a new 2 level Tap Room is expected to be ready soon, enabling the small 2 barrel brewery to more than double in size.

St. John Brewers beers are now available throughout the U.S. and British Virgin Islands, as well as in 4 states…including New Jersey!   Although the bottling and distributing are done in Maine, all the recipes are concocted, tested and approved on the island. All draft production is also done on the island.

Kevin and Cheech were not available when I visited, but I got the opportunity to meet with Brett Cracco, Sales and Marketing Manager. Brett was with the Tap Room a while ago, but recently returned to the island and is a brew industry veteran in his own right, having worked as Senior Brewer and Specialty Projects Manager at Heavy Seas Brewing in Maryland. 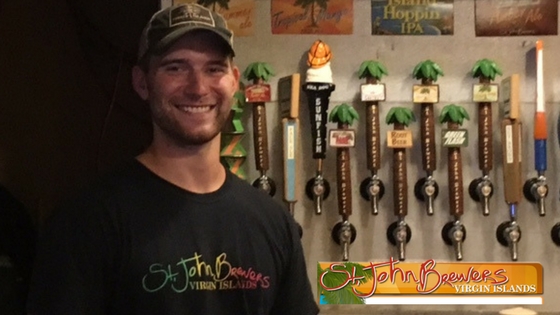 What was the First Beer you brewed? How was it?

A session IPA, drinkable with while still having some flexibility with your hops.

We haven’t a lot in the past but we are starting to now. Part of my job is partnering with Social Media and increasing awareness of our product.

How do you stay connected with the local area in relation to sourcing ingredients?

Obviously our Tropical Mango was originally inspired and sourced from our local fruit, but we also just brewed a Passion Fruit Gose (sorry that was kicked just before you got here) and our Toasted Coconut will be ready next week (sorry you will be gone by then) and others that are only available in the Tap Room. The island is very small and very limited fresh water supply, which limits what we can brew.  We can’t grow the grain or hops on the island and we also have to import any outside yeast we use, so that creates some challenges.

Temperature control is key, consistency of process is also very important. Lastly, repeat and refine your recipes…master one before you move on to another.

Don’t look to get too huge too fast. At least in the beginning, keep it in house, keep it small.

Tank 7 Farmhouse Ale by Boulevard Brewing Company. Just because it is my favorite beer. Fantastic!

Ever since I started with the company, it has always amazed me that the entire community has supported St. John Brewers.  Through the past 13 years we have always had that support, so when the fire burned down our tap room in 2015, the owners knew it was only a speed bump and that they would be able to rebuild and still have the locals standing by our side the whole time.  That is why I love this island!

Whatever someone wants to buy me!

Where do you see the brewery in one year…five years?

Where do you see the brewery in a year? 5 years?
A year…new Tap Room being opened for business. 5 years…with the success of the expanded brewery being able to supply more kegs to more bars and restaurants on the island.

For more information on St. John Brewers, visit them on the web at www.stjohnbrewers.com