Cape May Brewing and Night Shift Collaborate on Brewberry

Cape May has been doing some great collaborations over the past year and we are really looking forward to this one with Night Shift Brewing. Night Shift Brewing, which calls Massachusetts its home, surprised everyone in August 2019 when they announced plans to open a 130,000-square-foot, $10 million production facility, taproom, and distributorship in Roxborough by the end of 2020.

Cape May Brewing Company and Night Shift Brewing Collaborate on Brewberry, an Imperial Stout with Coffee and Blueberry

Cape May, NJ — Cape May Brewing Company and Night Shift Brewing of Everett, Massachusetts, are pleased to announce a collaboration beer: Brewberry, an Imperial Stout with coffee and blueberry, is brewed with coffee roasted by Night Shift in their recent expansion into coffee roasting.

Brewberry is an incredibly indulgent and decadent brew with an exceptionally robust malt bill that accentuates the natural coffee flavors and a whirlpool charge of Mosaic hops that brings out the natural blueberry flavors present in the coffee. A generous helping of blueberry juice was added at the tail-end of fermentation to add a jammy, subtle tartness to the otherwise chocolatey and decadent brew.

“We respect Night Shift and what they’re doing,” says Cape May Brewing Company’s CEO, Ryan Krill, regarding the collaboration. “Both breweries are relatively similar in terms of vintage and size, and, like us with Cape Beverage Distributing, they’ve opened their own wholesaler in Massachusetts. With all of our synergies, coming together to brew a great beer was a no-brainer.”

Night Shift is excited about the possibilities in collaborating with Cape May, as well.

“We’re inspired every day by new explorations of beer across the industry, so it’s exciting to collaborate with like-minded craft brewers who share the same passion and curiosity,” said Rob Burns, co-founder of Night Shift Brewing. “This collaboration with Cape May Brewing came together so seamlessly since we both develop beers that appeal to a varietal palate. Brewberry is an exploration of marrying different beverage categories, resulting in a strong coffee aroma with a subtle taste of coffee and the sweetness of blueberry.”

Neither brewery is a stranger to using coffee in their beer, with Night Shift’s Awake Coffee Porter and Night Fever Stout with chocolate and coffee, as well as Cape May’s Mexican Coffee Stout and Ties the Room Together, a White Russian-inspired cream ale with coffee beans, cocoa nibs, lactose, and vanilla being offerings from both breweries. With Night Shift’s 2019 expansion into coffee roasting created the opportunity to infuse Night Shift-roasted beans into a new brew.

“One of the reasons we decided to brew a beer with coffee is the success of Night Shift’s coffee roasting,” said Cape May’s Innovation Director, Brian Hink. “During our initial conversations, Night Shift had only recently launched their coffee arm, and they were starting to make some waves. I really wanted to use their coffee so we could really dial in the coffee to match the beer.” 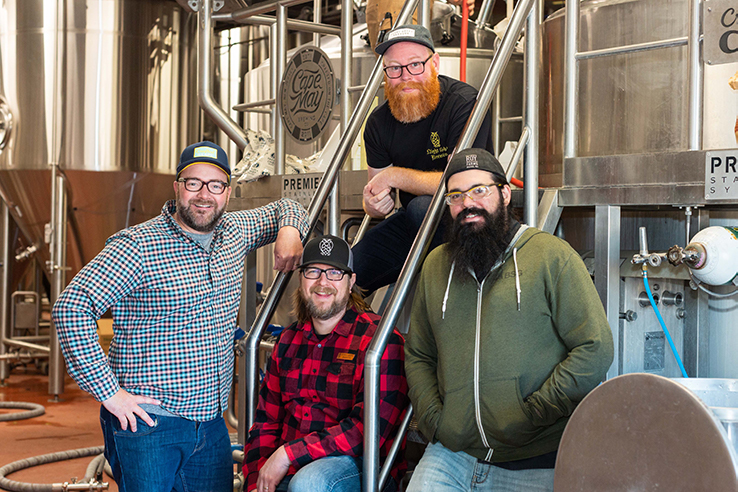 While one of the benefits of having an in-house roaster is that Night Shift is usually able to select the flavor profile of the coffee to match the flavors in the beer, the formulation of Brewberry worked a little differently, with the breweries deciding upon a coffee first, then developing the beer around the coffee. Once the coffee was selected, devising a beer around it was an easy next step.

“With the base beer being a stout we knew enough roast would come through from the grain bill,” Hink says. “So, it still has the distinctive roastiness you’d expect from a coffee beer, but the berry notes from the coffee are still front-and-center.”

CMBC and Tonewood Announce Collaboration: Two Versions of Me