Winter on the Boulevard in Seaside Heights can be kind of quiet, dark, almost desolate. A few lights from the local pizza places and bars, break up the evening, but it is a long way from the noise and crowds of the summertime. The distinctive logo of Heavy Reel Brewing Company will soon break through that 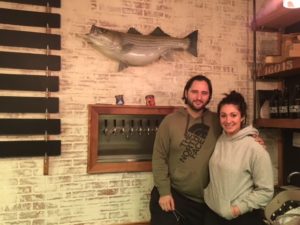 gloom, as another new brewery gets ready to open in Ocean County. I had the opportunity to meet head brewer/founder, Jeff Greco as well as his wife Jesse (head artistic director, if I can give her that title) as well as Jessie’s mom and dad, Susan and Paul Sosnowski to talk beer, breweries, and family over some supreme pizza.

The name Heavy Reel not only reminds you that the Atlantic Ocean is only 2 blocks away but also reflects family, as some beautifully framed photos of Jeff and Jessie’s grandfathers fishing dominate the wall to the left of the bar. A huge striped bass keeps watch over the taps (Paul says it was caught on eBay), while the wall to the right has an original mural of Jersey marine life, painted by Gregg Hinlicky a local artist.

Heavy Reel is the realization of a dream for Jeff, who after receiving a homebrew kit from Jessie as a gift about 5 years ago, was hooked (pun not intended, but it works.)  “The first beer I brewed was a Lagunitas 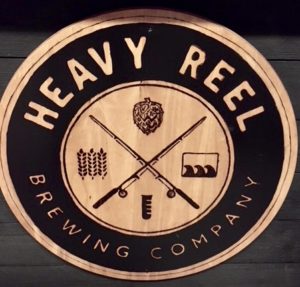 IPA clone. I would probably spit it out now, but I thought it was great! I decided then, I want to open a brewery.” Jeff realized that he needed a lot more knowledge, experience and skills to bring his ideas to fruition, so he put out an offer for free brewing help to any brewery that would have him. He needed to learn not only about brewing on a large system, he needed to also learn to sanitize and how to operate and market a business. His prayers were answered as he heard from Gretchen Schmidhausler, of Little Dog Brewing Company in Neptune, a pioneer of the NJ brewing community and someone who is always open to sharing her knowledge with new brewers. Jeff and Gretchen connected and he wound up serving as her apprentice for 6 months. “Gretchen was amazing, her wisdom, advice, and experience really helped us get off the ground. I learned so much, she was a tremendous help in making Heavy Reel become a reality!”

Jeff was ready to go, but as with all breweries finding a location was key. He scouted a number of possible sites before he settled on the Boulevard location in March of 2017. Once all permits were 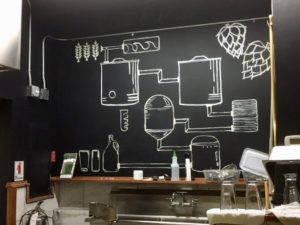 obtained they were able to begin construction of the 2 ½ barrel brewery. Paul’s carpentry skills came in handy and can be seen in the beautiful reclaimed wood look on the walls. Jessie’s artistry can be seen in the Heavy Reel logo on the front of the taproom bar, done with a wood burning technique, as well as in the brew process diagram on the back wall of the brewhouse. The wood burning style will also be evident in the stools and taproom tables Jessie will be working on.

Yes, enough about the decorations, how about the beer?! Well, Jeff anticipates his opening date to be near the end of March, however, Heavy Reel has already had a foray into the large beer production business. Jeff collaborated with Jason Goldstein of Icarus Brewing on Bay Dreamer, which was released at Icarus, 12/30 along with some limited edition shirts promoting the brew.

Recently, Heavy Reel received the approval to begin brewing beer, so the first beer in the fermenter, Drowning Clown, a Pale Ale was brewed last weekend. The family theme continues even amongst our breweries as Jeff got support from Icarus, Last Wave in Point and Backward Flag in Lacey to help get production off the ground.  “I plan on having about 8 beers on tap, 6 rotating standard beers, but 2 will be experimental. That’s part of the fun of brewing so I want to do some crazy stuff, surprise my customers.” While Tired Hands Brewing in PA as well as Twin Elephant in Chatham have some of his favorite beers, Jeff had a different answer then I’ve heard when I asked: “What’s your favorite beer?”
“I like IPAs, but favorite beer…depends…who am I drinking it with?”
Good answer….hope you catch a big one Heavy Reel!