Tell them you found it on sjbeerscene.com!

7 Mile Brewery will be having their weekly Quizzo night  with Joe Gaughan hosting at 7pm. 7 Rounds of 7 Questions including a 7 minute speed round! Winner gets a $25 gift certificate. And while you are there, have a pint or two of their fine beer.  We had the opportunity to try the Walter White IPA and it is fantastic!!

Slack Tide Brewing Company will be starting their Summer Hours this week-The will be open Monday, Wednesday, and Thursday from 2pm-8pm, and Friday through Sunday from 12pm-8pm.

Garden State Beer Company will be having a Tap Takeover at the Hi Point Pub featuring live music from Sensacoustic.  The event runs from 8pm-2am and features Absecon Bay Ipa, Cream of the Crop, and Blue Jersey.

Tomfoolery Brewing will be hosting Fool’s Trivia at 6:30 pm.

The What’s On Tap show will be doing a live broadcast tonight for their 100th episode.  We are extremely  humbled that we have been asked to appear on the show.   The show will air live on SNJToday Channel 22 in Cumberland County and on Facebook! The episode will also be broadcast on June 29th on WMGM TV in other viewing areas.  Gary and Tara have put together a great guest list so check it out!

Chickie’s and Pete’s will be having an Oyster Happy Hour and Carton Tap Takeover on the Patio from 6-9pm. Enjoy Buck A shuck Oysters and the music of Nancy Gitto!

Tuckahoe Brewing Company will be having a Tap Takeover at the Grand Opening of Crossroads Bar and Grille’s outside patio in Egg Harbor City.  Seven Stone Duo will be providing the music and WZXL will be having a live broadcast.  The festivities start at 6pm

Goodnight Irene’s will have a Troeg’s Tap Takeover this Thursday starting at 7pm.  The gang at Irene’s hasa tap takeover every Thursday for the entirety of the Summer, check them out on Instagram or Facebook to get the latest updates.

Garden State Beer Company will be having a Paint and Paints night with Jen from 7-10pm.  The cost is $40 and all supplies are included.  Tonight’s painting is “Mountain Meadow”

Garden State Beer Company  will be closed for a special event tonight.

Ludlam Island Brewery are accepting signups for their inaugural mug club at the tasting room.  The mugs are fantastic and only cost 27$.  And Remember, their one year anniversary party happens next week!

The Cape May Hops Festival featuring Blues, Brews, and Barbecue takes place today on the grounds of the Emlen Physik Estate in Cape May from 10am-6pm.

Vagabond Kitchen & Tap House will be featuring the music of The Usual Suspects under the tent from  from 8pm-12am.  Drink specials and great music, plus a fantastic Tap List and great food-what more could you ask for?

Three 3’s will be having a FUN Run or Walk and Beer starting at the tap room at 11:30 am.  Walk or run the scenic 4 mile loop and when you are done enjoy an adult beverage at the tap room! 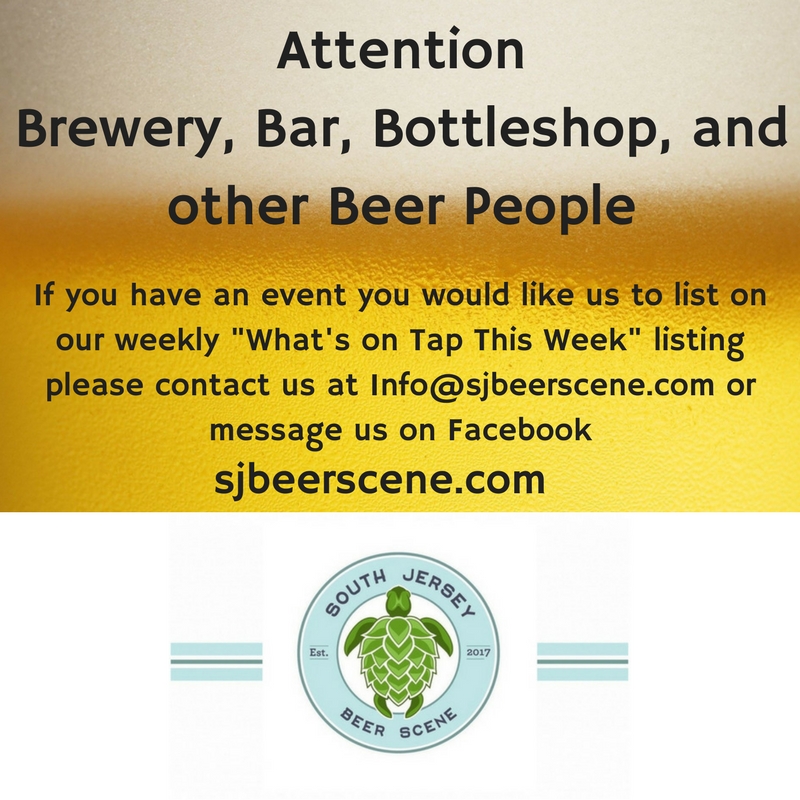