New music. It can be fantastic. It can be exciting, innovative, it can stir up emotion, and unite people. But, why is it when an album comes out that I’ve anxiously been waiting to hear, I only listen to it 3 or 4 times then I’m over it? Why? Where does this come from? When I was younger I’d listen to an album/tape/cd until I wore it out. Weeks at a time would go by as I absorbed every breath the singer (well, full disclosure, probably a rapper) took and every syncopated fill the drummer hit. At some point, something shifted and I don’t listen to new things with the same enthusiasm and zeal that I once did. Is it because I have just about everything ever recorded on demand in the palm of my hand, and I feel overwhelmed by all the music I’m NOT listening to at any given moment? Maybe that overwhelming feeling is the reason I inevitably find myself leaning on the old music that changed my life and made me who I am today, which isn’t necessarily a bad thing.

I noticed a correlation recently between the music I consume (a ton) and the beer I drink (more than a ton). As with new music, I’ll drink a new beer release and find myself smitten with it. I’ll take artsy, jealousy-inducing pics of it and post it on ALL social media forums while I wait anxiously (drunkenly) to collect as many of those addictive little hearts and upright thumbs as digitally possible for my boner beer. But, once that beer is gone, I don’t reach for it again. Like ever. Why is that? Are there too many new releases to keep up with? Recently, I’ve heard the term “release fatigue” floating around the craft beer water cooler. As I interpret it, “release fatigue” happens when there are too many new beers on shelves for drinkers to fill up their untapped account with, so they keep grabbing what’s new and not grabbing what they’ve already had that has just 3 stars (“This beer says it’s unfiltered, I can still see right through it! THREE STARS!”). How are breweries supposed to keep up with the pace of drinkers that are constantly on the lookout for the next IG-worthy one-off? Why is it that once a hot new release makes the IG and untapped rounds for a few weeks, it becomes irrelevant? Is this a sustainable way to grow a business? Example: Brewery XYZ has been making pretty solid beer for a few years. Recently they made a fantastic New England Double IPA which sold out instantly in the brewery and leaped off local shelves and tap lines at blinding speeds. What is that brewery’s next logical move as a business? Supply the (perceived) demand. So they make more and it takes a month to get back on shelves. In that time, guess what happens… no one cares. The buzz is now squarely anchored around the exact same style beer by another brewery leaving XYZ Brewing very confused and looking for answers as their once RED-HOT beer slowly gets older on shelves. I wonder if there is such a thing as a favorite brewery or a favorite beer at this point? By beer hopping from one to the next with every cracked can, how CAN there be a brewery/beer that inevitably becomes someone’s favorite? I don’t have answers to these questions. I guess they’re more of a rhetorical glimpse at my inner monologue as I eye up NJ tap lists and retail shelves on my daily grind. I was sitting a bar a few days ago (shocker) and saw Dogfish 90 Min IPA on tap surrounded by every fruit juice bomb IPA currently available in the great Garden State. Now I love these NEIPA’s as much as the next hipster, but….. I really do always find myself leaning on the old beers that changed my life and made me who I am today. Does that negate my 41-year-old hipster street cred? I think it just might.

Seriously, why is it ok to pop on Physical Graffiti by Led Zep or Check Your Head by the The Beasties and break off the volume knob (are volume knobs still a thing? I feel like they’re not…), but if someone hands you Rogue Dead Guy Ale it’s a violation of the highest order?! Those classic beers are the foundation for what is happening today. Just like The Beatles, Stones, Floyd, Zep, Beasties, Tribe Called Quest and Prince are the foundation for current music, Victory Hop Devil, Stone IPA, DFH 60 Min, 90 Min, Allagash White, Troegs Hop Back, Flying Fish HopFish are the foundation for where we currently find ourselves in the craft beer world (we need to come up with a new name by the way. The word ‘craft’ is now being used to sell pizzas at pizza hut, slimy lunchmeat sandwiches at subway, and some preposterous concoction from Ronnie Mac himself at McDonald’s). Next time you’re in a store and an employee says you JUST MISSED the last 4pk of the latest juice bomb #beerporn beer you left work early to track down, go reacquaint yourself with some of the classics living on shelves in South Jersey. You’ll be astonished by the selection (ridiculous amount of amazing Belgians on shelves, more Bruery Beers than even The Bruery themselves has access to) and in some cases, already perfectly aged bottles! You can find these gems sitting on shelves all over South Jersey and all over the entire state! And we haven’t even mentioned the imports yet! Schneider Aventinus, Rochefort 8, 10, 12, Orval, Sam Smith, Chimay and St Bernardus! What a time to be alive! All of these beers are collecting dust on shelves all over South Jersey as the shiny new can with the tripped out artwork and 17-word name arrives in the store and finds a home in under an hour. I wonder how many reading this have had the opportunity to sit with a Schneider Aventinus, or an Orval, or a Sam Smith Oatmeal Stout. If this rite of passage has passed you by, it’s not too late! Run to your nearest Discount Liquor Emporium Outlet and comb over the goods in the beer aisle. There you will find a treasure trove of beers that were once upon a time, the most sought-after beers in the state!

If the music we grew up with, which molded our personalities, kept us company and watched us grow up, is still a big part of our lives, shouldn’t the beers that shaped us ALSO hold a special spot in our lives? Is filling an app with as many rare, one-off beers as possible in the ultimate quest for upright thumbs really all that important? I dunno, maybe I listen to too much music, and chances are I drink too much beer for any of this to seem remotely logical. But… Do yourself a solid the next time you’re in a store with an overwhelming selection, grab one of the OG’s sitting there waiting for a home and luxuriate in its timeless glory. Those beers connect us to the past, help us remember how we got where we are today, and if you look hard enough, give hints as to where the craft beer universe is headed in the future. Just because it’s not an IPA doesn’t mean it’s a bad beer, but that’s another rant for another time I suppose. Go open a beer.

I’m Jay Rose, host of Fear Of A Craft Beer Planet Podcast, and I approve this message! 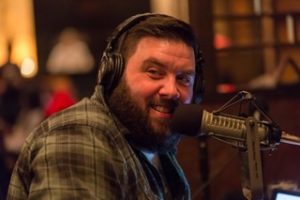 Craft Beer Podcast hosted by Jay Rose, Richard James Rabic, Rob Forczek and Ryan Harbinson. Jay Rose has been in the beer business for 20 years. Currently, he works for The Hunterdon Distributing Specialty Team in Southern NJ as their Exquisite Liquids Expansionist. Richard Rabic has been in the radio biz for years and most recently co-hosted/produced for the Mary Walter show. Rob Forczek has also been in the beer business for 20 years and is the NJ Rep for Stone Brewing. Ryan Harbinson is a craft beer fan/conspiracy theorist with an opinion on everything.
Soundcloud Link:  https://soundcloud.com/fearofacraftbeerplanet
iTunes link: https://itunes.apple.com/us/podcast/fear-of-a-craft-beer-planet/id1000418374?mt=2