Scattered around South Jersey are micro craft breweries that many of us have come to know, love, and even enjoy frequently. Another lesser-known but equally important aspect of South Jersey is the rich history the lies here. The premier way to enjoy both magnetic aspects of this beloved region is to mix them.

Well… Did you happen to know South Jersey is home to the ‘World’s Greatest Elephant’? A safe bet might have been wagered that most outsiders and even some lifelong South Jersey residents did not.

Originally built as a novelty attraction in 1881, Lucy the Elephant is a unique structure that stands six stories high, and at one time, towered over everything along the Atlantic County coastline. When first erected by James Lafferty in the late 19th century, Lucy was situated in what was known then as South Atlantic City.

Outwardly modeled after the Asian elephant, Lucy stands east facing the Atlantic Ocean and has served in the past as a hotel, a personal residence, and among other things, a tavern that nearly caused the structure to burn to the ground due to a visiting drunkard in 1904 (we all know one or two or those). Lucy continued as the face of Southern New Jersey as she changed hands from various owners until finally being donated to the city of Margate (present-day South Atlantic City) in 1970. The city, along with a newly formed conservation group dubbed the Commission to Save Lucy, together would face the elephant’s most difficult challenge to date: the physical movement of the entire six-story building.

The city of Margate and the commission decided that the damage from the building sitting so close to the salt water of the Atlantic Ocean while also sitting on prime South Jersey beachfront real estate would serve as Lucy’s end if the pachyderm shaped structure was not moved just over two blocks down the shoreline road to a vacant lot purchased by the Commission to Save Lucy and the city of Margate. This major engineering feat was completed in under 30 days to relocate Lucy the Elephant to her new home, where she still welcomes tourists and locals today.

Lucy was designated as a National Historic Landmark in 1976 and was converted into a museum where guests can tour the inside of the world’s greatest elephant and enjoy beautiful views of both the Atlantic City skyline and the Atlantic Ocean.

Seeing this magnificent elephant costs a minor fee of $8 for adults and $4 for children 12 to 3 years old with children under the age of 2 touring for free. Lucy the Elephant is open all year-round providing limited hours during the winter and spring months and longer touring schedules during the warmer months. Check out LucytheElephant.org for seasonal touring schedules, for donations to the Save Lucy Commission, and the Lucy Gift shop, which stocks more things elephant than the average could be imaged. The website dives deeper into the history of Lucy as well as serving as the primary source from which information was gathered for this article.

Atlantic City: In & Out of the Casinos

Whether you tour the inside of Lucy the Elephant, walk beneath the belly of this larger than life structure or merely admire her from the parking lot, there is only one more thing left to do from here: find a cold beer.

Out: The Back Bay Ale House

If you would like to continue your outdoor adventure, then the Back Bay Ale House located in the 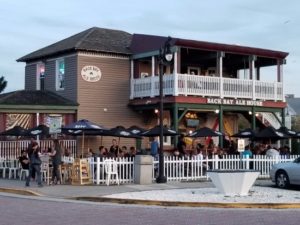 Nestled between the Marina District casinos and the world famous Atlantic City Boardwalk, the Back Bay Ale House offers an entirely different vantage point, this time from within Atlantic City, while offering an impressive list of local craft beers including two brews from Flying Fish Brewing Company; the Back Bay Sunset Ale and the Back Bay 1858, both brewed specifically for the Back Bay Ale House. The latter of the two was inspired by the year in which the mason jar was created and the beer, as well as all cocktails, come in a 16-ounce mason jar. Other local craft beers on tap sample from other local breweries such as Cape May Brewing Company’s Cranberry Bog, and Dogfish Head’s flagship 60 Min IPA.

In: A Dam Good Sports Bar 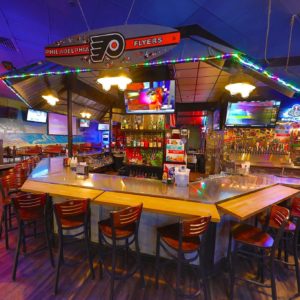 If crowds and casinos are more your scene, then there is no other finishing point to an adventure, than A Dam Good Sports Bar located on the third floor of The Quarter in the Tropicana Hotel & Casino, just a short drive from Lucy the Elephant.

It comes as clear convenience that A Dam Good Sports Bar happens to be housed within the casino closest to Lucy, but there it is and offers many delectable craft brews on tap. Some of the local craft options on tap are Glasstown Brewing Company’s 609 IPA, Ludlam Island Brewery’s Island Big Dirty Double IPA, and Dogfish Head’s 60 Min IPA.