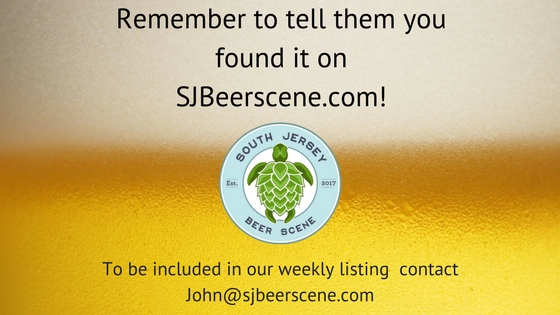 7 Mile Brewery will be having their weekly Quizzo night with Joe Gaughan hosting at 7 pm. 7 Rounds of 7 Questions including 7-minute speed round! Winner gets a $25 gift certificate. They will be open today from 12pm-10pm.

Cold Spring Brewery is open today and every day from 12-8 pm this Summer.  It is a great time to visit the brewery and take a tour of Historic Cold Spring Village.  The brewery itself is a work of art, a completely restored 1804 three bay English-style Cape May County barn from Upper Township.  Great beer and, if your not careful, you might just learn a little something!

Slack Tide Brewing Company will be featuring Live and Local music tonight by Andrew Jude at 5-8 pm at the tap room.

Cape May Brewing Company will be having a tap takeover at Harpoons on the Bay in North Cape May tonight from 5-8 pm featuring The Bog, Apple Bomb, Coastal Evacuation, Honey Porter & Tower 23 with Kiwi and Lime! Harpoons On The Bay will also be creating funky beer cocktails with the CMBC beers on tap.

Devil’s Creek Brewery will be hosting a PAW it 4WARD fundraiser from 5-9 pm at the brewery. Paw It 4ward assists local animal rescues with funds to offset the exorbitant medical bills they incur as they save lives of helpless and abandoned pets. A donation of only $25 will get you a night of fun and beer while you’re helping save animals lives! Your ticket includes 2 pints of beer or 1 pint/1 flight* of beer, and food (provided by Paw It 4Ward). Buy your tickets online HERE or at the door

Slack Tide Brewing Company will be at Beach Creek Oyster Bar & Grille tonight and tomorrow in Wildwood pouring 5 Fathom and Sand Spike at the Donavon Frankenreiter Concert. Tickets are 35$ and are available HERE

Forgotten Boardwalk Brewing Company will be celebrating National IPA Day at the taproom today with their great lineup of IPA’s including a Pin of 1916 Shore Shiver with apricot & habanero.

Goodnight Irene’s will be hosting a tap takeover with Two Roads Brewing Company this Thursday starting at 7 pm.  The gang at Irene’s has a tap takeover every Thursday for the entirety of the Summer, check them out on Instagram or Facebook

Cape May Brewing Company will be celebrating National IPA Day with 2 special Firkins in the Tap Room and 2 special kegs in the Beer Garden.  For details, visit the events page of CMBC HERE

Human Village Brewing Company in Pitman will be hosting an open mic night tonight at the brewery. Come in and enjoy some great music from local musicians as well as some delicious local beer! Musicians are encouraged to come by 6:30 PM in order to sign up to play.

Lunacy Brewing Company will be open tonight from 5-9 pm.  When we were first starting out, they were one of the first breweries to give us some street cred on the interwebs.  They are great guys, their customers love them, and they are making some great beers.  Stop by tonight and celebrate National IPA Day with this fun crew!

Garden State Beer Company will be having live music tonight, come out and hear the sweet sounds of Indelible Groove while enjoying some delicious BBQ from TJ’s BBQ!

Flying Fish Brewing Company will be having a can release of Jersey Juice tonight at 5 pm in their Somerdale tasting room.  It is touted to have more hop flavor and aroma “thanks to newly developed cryogenic hops that are twice as intense in flavor and aroma over regular hops. This hop lupulin concentrate allows us to amp up the juicy and resiny character of the beer without the astringency caused by adding massive amounts of leaf hops or pellets. The result is a huge citrus, mango and tropical fruit hop party in a complex, unfiltered beer”.  Sounds like a winner to us!

Tuckahoe Brewing Company will be having their first ever can release today at 3 pm with the release of their very popular Quatrain American IPA. Also, Three Guys Rolling Pies will also be there making some great pizza.  Also, it is Sales Manager and all-around great guy, Rob Callaghan’s birthday.  So stop out, have a beer and some food, wish Rob a happy birthday, and grab those Quatrain Cans!  Be sure to check out our interview with Head Brewer Tim Caron on 8/3 for more insights on the brewery!

Garden State Beer Company will have Quizzo tonight starting at 7 pm at the taproom.

Pinelands Brewing Company will be having a Tap Takeover at Harry’s Oyster Bar in Atlantic City tonight from 5-7 pm.  Jason Chapman and the crew will be bringing 6 different Pinelands brews that will be pouring at the outside bar!

Spellbound Brewing will be having the much-anticipated can release of Major Nelson Pale Ale today from 12-8 pm at the brewery in Mount Holly.  One of the most popular beers from the tap room has made it to the canning line which is great news for beer geeks everywhere!

The Cape May Craft Beer & Crab Festival returns for its 6th year at the Emlen Physick Estate in Cape May.  The event is family friendly and runs from 10 am-6 pm.  Cape May Brewery, Slack Tide Brewing Company, 7 Mile Brewery, Ludlam Island Brewery, Tuckahoe Brewing Co, and Spellbound Brewing will be represented along with a great selection of tasty summer foods, a Victorian Circus, and live music all day!

Clayton Liquors is the place for take-out for local craft beer.  Raj curates 22 taps and fills Growlers and Crowlers with your favorite South Jersey Craft Beer.  The menu is constantly changing and is updated often on Beer Menus by clicking HERE.  Give them a follow on Facebook, Raj updates frequently for us beer nerds!  We recently did an interview with Raj and he is dedicated to local beer and to his customers, he is truly one of the good guys in the South Jersey Beer Scene.

Village Idiot Brewing Company will be having a release party celebrating Opacity, a beer brewed at Village Idiot with Chris Fareri, winner of the Keg & Barrel Homebrew Store IPA Contest.  Opacity is a Hazy style IPA showcasing motueka/wai-iti and citra hops. Double dry hopped with motueka and wai-iti.   Congrats to Chris and a big shout out to Gina and everyone at Keg & Barrel for supporting local brewers!

Wingcraft in Atlantic City has 40 great beers on tap and the worst kept secret in South Jersey is that their Sunday Brunch is fantastic.  A great way to start your Sunday!

Here are the Winners from The 2018 Atlantic City Beer & Music Festival!