In this edition of 10 Questions With… I headed to Clermont, N.J. to talk to head brewer Tadhg Campbell of one of my favorites, Slack Tide Brewing Company.  Tadhg and his brother Jason opened up Slack Tide in December of 2015 with the intention of making high-quality beer from locally sourced ingredients whenever possible. The Campbell brothers started brewing in their garages about 7 years ago. While the first couple batches were made from extract kits, they quickly moved to all grain where you have more control over the final product. The first year or so was rough, but with a great response from family, and friends they started thinking that they may want to make this more than just a hobby. So they brewed up 6 batches (most are still brewed today) bottled them up and gave them out to 48 people with an 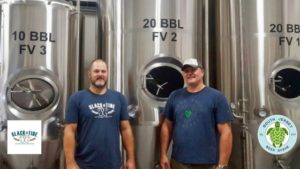 anonymous rating sheet in self-addressed envelopes. The response was extremely favorable. One of the 48 was actually a certified beer judge who got a couple of his judging buddies to taste the samples as well, and filled out a more detailed score sheet. The response was also very good, so they asked if he thought they should open a brewery which the beer judge replied, “I would”. So with Tadhg as head brewer, and Jason bringing his brewing knowledge and project management background in which he is very meticulous with the paperwork, things started to come together. Now you add Jason’s wife, Bobbie, with her marketing background, and Tadhg’s wife, Natacha, with her clothing background you have a great recipe for a successful business to go along with the great beer recipes. I highly recommend a trip to Slack Tide to get “unstressed”.

What was the first beer you brewed, and how was it?

It was an extract kit called Dead Ringer IPA. It turned out as well as could be expected for the first time. It was drinkable, but not delicious by any means. Not sure if we did the recipe justice, but we drank it, and thought it was the coolest thing ever.

What is your favorite style to brew, and why?

That’s a tough one. We try to brew many styles here. I know some brewers may be hesitant to say it, but I’m going to have to say an IPA. It’s the most popular and sought-after style, and there are so many variations of it. The New England style is really popular and is a little more difficult to hit the target then the West Coast IPA.

Do you look at ratings on Untapped, Beer Advocate, or Rate Beer, and if you do, does it influence your recipes?

It would be silly not to, but I wouldn’t say we look at them too much. The feedback we like, and enjoy, and take into account the most is the face to face contact-Whether it’s in the Taproom, or at a festival, or just out in public. We also trust the other local brewer’s opinions and do the same for them. It definitely does not affect our recipes.

It’s a big part of what we do here. Since we do live in the Garden State it’s nice to see farmers like Bad Cat Farms, and Rabbit Hill Farms starting to grow hops and malts. We brew with fruit from Hammonton, and sweet potatoes from Vineland, and Aronia berries that are harvested right down the street. What we do is local, and you always have to pay it forward local with the farmers whether it’s honey, fruit, vegetables, or even oysters.

When Jason and I started brewing in the garage we felt our beer quality took a huge step when we got a temperature controlled fermentation box. Dialing in the temperature made our beer more consistent, and a true reflection of what you got.

Do your homework! Be prepared to wait for a lot of the permits. The number one piece of advice is to calculate how much time you’ll need to spend at the brewery, and then double or triple that. Brewing is 90% cleaning and sterilizing.

If there was a beer that you could brew with no regards to cost, production, or sales what would it be?

I knew this question was coming, and I was debating on a few. I would have to say a big barrel aged Stout or Barleywine. The amount of time would be the expense, not so much the ingredients.

I would have to say the way the community embraced us. Not just the customers who are some of the best, but the other local breweries as well. We all work hard, we all drink beer, and we all have fun. It’s just a great fraternity of people, and we all want each other to succeed.

Other than your beer, what is your go-to after a long day at the brewery?

Most of the time it would be a cold glass of water, but if not that it would definitely be something from a local brewery.

We are currently installing a 10 BBL system which is almost complete. It’s going to take a lot of outside work in sales, but we want to have it maxed out. Maybe tweak the Taproom hours. In 5 years we want to be canning a lot so we can get into the package good stores. Hopefully another expansion, and continue to grow organically.

Bonus Question: What is your favorite beer, other than yours?

The most memorable beer would be Red Dog. (laugh) When I played football in college the 1st team was the blue team, the 2nd team was the white team, and the 3rd team was the red team. Since I was a freshman I was on the red team, and we called ourselves The Red Dogs and drank a lot of Red Dog. Probably because it was like $5 a case. This is a hard question because I like different beers in different seasons. The answer would be Firestone Walker Brewing’s Wookey Jack, which is not in production anymore. It was actually the inspiration for our Knockdown Black IPA which took home the bronze medal at the Best Of Craft Beer Awards in Bend, Oregon.

Cape May Brewing Company Having A Double Bottle Release on Saturday, 8/19